An All-Star line up, featuring many of Detroit Hip-Hop’s finest accompanied by production from French producer Astronote. Listen and download this project below. Originally slated for release in 2013, learn why it’s finally being set free after almost 5 years of waiting. (For Adult Ears Only)

Around 2010 it seemed like most of my friends in the Detroit Hip-Hop scene had albums out. It was the blog era, and my people were getting love everywhere. Of course okayplayer, Nah Right & 2dopeboyz were holding us down, but less hip-hop centric spots like Pitchfork and Rolling Stone were regularly supporting too.

We had somewhat rebounded from J Dilla’s death, and most folks were back to creating, touring, and getting more media love than I’d ever seen. Usually an artist here or there would break through, but it felt like this was Detroit’s time to shine. 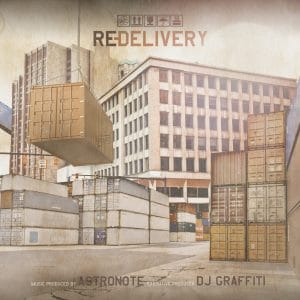 The moment I realized the bubble couldn’t last forever, that was the birth of Re-Delivery. It was built to drop once things got quiet.

I reached out to Astronote, to be the creative force behind the project.

He told me he was inspired and influenced by J Dilla and Detroit Hip-Hop. I thought this would be the perfect way to collab and make sure everyone I know was aware of his talent.

On paper I ‘manage’ Astro. But honestly, he’s always managed himself. I occasionally help coordinate paperwork and negotiations.

Since many of the artists that I asked to get on board were busy doing shows and enjoying the shine created by their successful albums, we decided to create Re-Delivery.

A project of remixes and original tracks, so Astro could remix artists who couldn’t easily get in the studio to drop something new.

Astronote is the best remixer I’ve ever known. A “good” remix keeps the best characteristics of the original. Astronote’s remixes can make you forget the original altogether.

That’s not to say he outshines the original track. He takes a vocal to such a different place that you’re not even concerned with comparing it to the original.

He did the hard work of producing, mixing and mastering every track. I was the connect; on the ground here in Detroit collecting acapellas, giving feedback and coordinating studio sessions.

First the project got shelved because of some music industry politics. Then, I got to work building my digital marketing agency Overflow. I was still DJing, but wasn’t as focused on releasing projects.

Time passed and the industry was changing. I didn’t want to drop a disposable album that would get a half-day of fanfare then disappear. But that’s just what the game is now.

For a minute it was going to drop as a special collaboration with Faygo (thanks Josh B!), but I dragged my feet and before I knew it my boy who was supporting things at the brand had moved on to another position.

A few labels wanted to release it, but coordinating contracts and publishing for a collab project like this can be a nightmare.

Finally, we were going to put it out following the buzz of Kendrick Lamar’s To Pimp a Butterfly album, but in the final hours the Astronote produced track didn’t make the album (it came out as track 03 on Kendrick’s Untitled Unmastered instead).

Shouts to Kendrick for noticing Astro’s genius, Rapper Pooh for introducing us to TDE, and Dave Free for the late night calls to make sure Astro got taken care of.

I was upset the song didn’t make TPAB, but I believe Kendrick’s live performance on the final episode of The Colbert Report was so explosive that he had to wait a minute to give the studio version its own lane.

In 2015, I told Astro we just have to put Re-Delivery out. He was hesitant. At that point his production style had changed somewhat, he’d started to focus mainly on jazzier, non-sample based tracks like his more recent EP O.B.E. Dropping Re-Delivery could leave people wanting more of a style he was no longer inspired to create.

That being said, this post is the release… no heavy promo or big rollout. The music is no less amazing than it was back in 2013, and it deserves to be heard. I’m sorry Astro, gotta set it free!

If you didn’t grab it already, download Re-Delivery here or stream it on Soundcloud.

Thanks to Astronote and all the Michigan artists that got down on the project. All the managers who helped coordinate, and especially everyone who fought off the urge to leak the records on their own. A few additional thank yous…